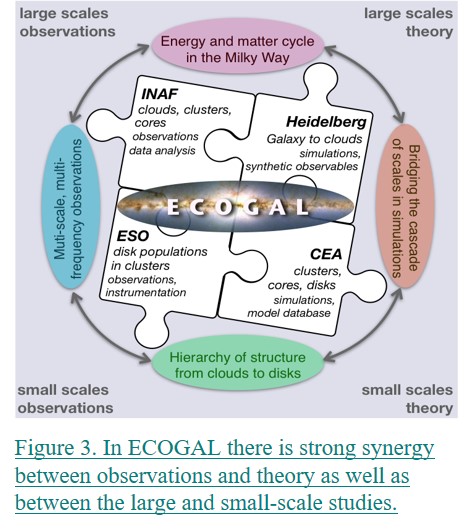 ECOGAL will follow a multi-level synergistic approach to investigate the extreme range of scales and large number of physical processes that together make up the Milky Way ecosystem. This approach is based on four fundamental pillars, multi-wavelengths observations, high-resolution multi-scale numerical simulations, development of state-of-the-art instrumentation, and innovative data analysis methods. Its foundation is the combined expertise and knowledge of the four teams involved (see Figure 3).

The Paris-Saclay (CEA) team consists of experts in the numerical modeling of the star formation process, with focus on the small scales from cores to protoplanetary disks, and of observers on the disk scale. They also bring in important expertise in building numerical simulations databases.

The INAF team is specialized in large-scale multi-wavelengths surveys of the Milky Way and studying its population of star-forming molecular clouds. Team members also have vital expertise in machine learning techniques and large observational databases.

Furthermore, we have two associated partner teams. These are the University of Manchester, for designing, testing and delivering low-noise amplifiers for the ALMA receiver system (PI Gary Fuller), and IPAG Grenoble, who will contribute molecular cloud observations and cluster dynamics (PI Frédérique Motte).

There are several complementary levels of synergy between the ECOGAL teams. The first synergy is between observers (ESO and INAF) and theorists (Heidelberg and CEA). All regions observed by one of the observational programs in ECOGAL, will also be modelled with the appropriate physical processes. Comparisons will then be performed between the observations and the simulations (a process that entails further synergies as described below). The second synergy comes from the complementarity between the scales. Two teams are expert in the large and intermediate galactic scales of interest for this project (Heidelberg for the simulations and INAF for the observations), while the two others are experts of the small scales of the projects, that is protostellar cores and accretion disks (ESO for the observations and CEA for the theory). In practice, the large-scale environment corresponding to the regions where the disks will be observed, will be provided by the INAF team. This will be fundamental to understand the influence of the environment onto the disk evolutions. Similarly, the Heidelberg team will provide the CEA team with initial conditions for detailed cluster and disk simulations that will extracted from full galaxy simulations. These two synergies are at the very heart of the ECOGAL project. Our goal of connecting all Galactic scales consistently could not be achieved without this close collaboration and organisation.

There are other important synergies, that come from the specific and complementary competences assembled in the ECOGAL collaboration. First, the ESO team will be engaged in building instruments that are the key to many of the required observations of the project. Second, the INAF team has acquired essential expertise in machine learning and its application to the molecular clouds. This will be extended to other phases of the ISM and to studying correlations between simulation results and observational data. Third, the Heidelberg team is developing powerful radiative transfer codes, such as RADMC-3D and POLARIS. These allow us to derive synthetic observational signatures from numerical simulations, which are a prerequisite for the detailed one-to-one comparison between simulations and observations. Fourth, the team at CEA has experience in building and maintaining large web-accessible database systems for simulation data. These will be expanded to include all ECOGAL data and to make them freely available to the larger community.